Seeya in a KIA! 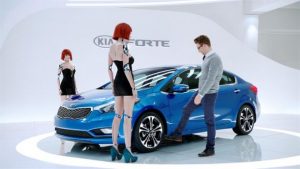 What the heck? Why did you move to KIA? I thought you liked it at SMP?

These have been some of the questions that I’ve fielded since moving over to KIA. I did like it at SMP; there’s great people working over there. But, for me, at this stage in my career, moving to a FFUN company just makes sense.

FFUN was one of  Canada’s Best Managed companies in 2015. They have numerous dealerships in Saskatoon (and my family and I don’t plan on moving away from the city).

And, one of the first cars I bought that really surprised me was my 2008 KIA Magentis. We then traded that Magentis in for a Sedona in 2013 when we got the news our family was increasing in size.

The KIA dealership is even closer to my house. I have a chance to establish the sub-prime business at this dealership. It’s a new GM and he’s motivated to get this dealership really growing and he’s done a fabulous job since taking over in July. AND, he has extensive sub-prime experience so the learning opportunities will be even greater.

So, that’s it in a nutshell. Snowsell Sales is at KIA. Seeya in a KIA!

And KIA has pretty great ads too!

Comments on "Seeya in a KIA!"